During the extended Bank Holiday weekend, there were some wonderful events to celebrate the Queen's Diamond Jubilee.  On Sunday, a river pageant took place on the Thames, which echoed Canaletto's 18th century painting of Lord Mayor's Day. The royal barge accompanied by a flotilla of small boats, some of which actually took part in the evacuation from Dunkirk in 1940, proceeded from Battersea Bridge to Tower Bridge.

Despite the cool, grey, drizzly weather, crowds thronged to the river embankments to watch the procession, or at least to catch a glimpse of it as it passed.  The rain miraculously held back until the final part of the event and then it came pouring down.


The Queen looked beautiful in a white dress and matching bouclé coat and Kate, Duchess of Cambridge was stunning in a red dress by Alexander McQueen.  Karl Lagerfeld made very complimentary remarks about them and thought that Princess Anne looked very chic too in her naval uniform!


The Queen continued to look marvellous and at the concert on Monday night, she wore a gold lamé dress enhanced with antique gold lace and Swarovski crystals.  For the service on Tuesday morning at St Paul's Cathedral, she wore a crystal studded, mint green coat and dress.  The Queen's lovely clothes were all designed by her in-house designer, Angela Kelly.  At St Paul's, Kate again chose an Alexander McQueen design - a very pretty nude toned lace dress. 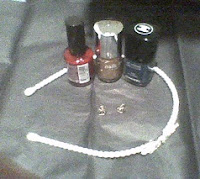 As my own small Diamond Jubilee token, I painted my nails in contrasting colours, (red, gold and blue), wore my little gold and diamanté crown earrings and my jewelled alice band.

Posted by Sandy at 00:55
Email ThisBlogThis!Share to TwitterShare to FacebookShare to Pinterest
Labels: The Diamond Jubilee