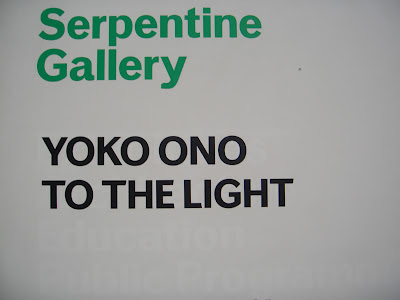 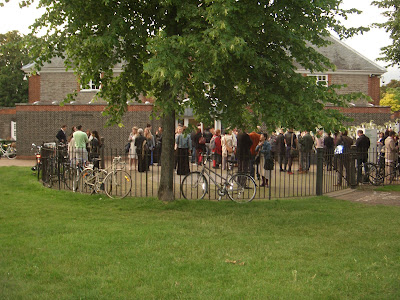 Earlier this week, an exhibition spanning over five decades of Yoko Ono's work opened at the Serpentine Gallery.  The exhibits, which include films, photographs and installations, demonstrate her significance as a pioneer of conceptual art.

Viewers are invited to enter and explore AMAZE, a perspex maze.  There is a series of identical photographs, each representing different people and events in her life from her birth to an imaginary end.  CUT PIECE 1964 is a film in which Yoko sits, passive, vulnerable, allowing members of her audience to come one by one and gradually cut her clothes to pieces with a scissors.  She remakes CUT PIECE in 2003, now aged 70 and wearing an elegant long black dress.

I found the exhibit of footprints on a sheet of paper particularly poignant.  Yoko explains that she and John Lennon made these footprints together.  More recently she hung the piece vertically on a wall and realised that "We were walking to the sky". 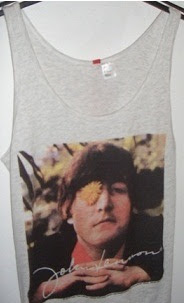 With thoughts of Yoko and John still in my mind, I was out looking at  t-shirts and vests.  Icon and band tops are key pieces this season in the "festival" look.  Dolce and Gabbana have some beautiful icon t-shirts but there are many to be found in the High Street shops.  I came upon this John Lennon vest at H&M.  With an image taken from a Goldblatt photograph and a Yoko Ono Lennon copyright inscription, this was somehow a rather special vest.


Posted by Sandy at 12:25
Email ThisBlogThis!Share to TwitterShare to FacebookShare to Pinterest
Labels: Fashion S/S 2012, Out and About