Spring may have officially started last week but it's been even colder with rain, sleet and snow.  Any early enthusiasm I might have had for Spring clothes seems to have evaporated.  Coming in from the cold with a little white carrier bag with CHANEL in black letters printed on it is a different matter.  I enjoy buying perfume whatever the weather.

My favourite perfume is the iconic Chanel No 5.  Described by Chanel as "floral-aldehydic, a bouquet of abstract flowers", it is a blend of many ingredients including rose, jasmine, ylang-ylang and orange blossom plus the aldehydes which give the perfume its power and sophistication.

Although I do occasionally wear the perfume itself, most of the time I spray on the eau-de-toilette.  I like the Purse Spray in black lacquer trimmed with gold, which holds a 20ml refill.  It comes in a box with two more 20ml refills. 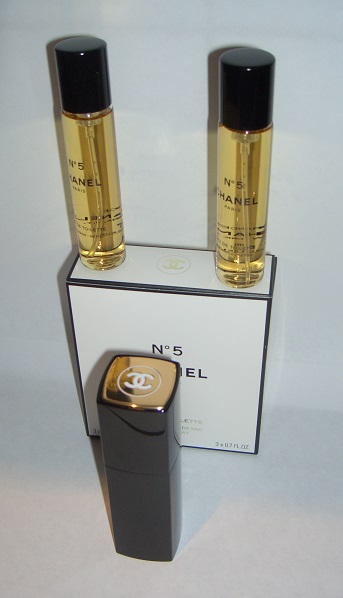 Chanel No 5 dates back to the early 1920's and it is a classic and sophisticated perfume.  About five years ago, Chanel brought out No 5 Eau Première, a modern interpretation of the legendary fragrance for the twenty-first century.  It gives the option of a lighter, fresher more delicate way to wear this wonderful scent.  Eau Première is available in a 20ml Purse Spray in black lacquer trimmed with silver, plus two refills.

It's still bitterly cold out there but it's getting dark later.  British Summer Time begins this weekend and we will be putting our clocks forward by one hour.  So even though the weather's un-springlike, it is really Spring.  I might look around for something warm like knitwear or a scarf in pale pink to look more seasonable.  I noticed that some designers were even showing pale pink  in the Autumn/Winter 2013 collections.