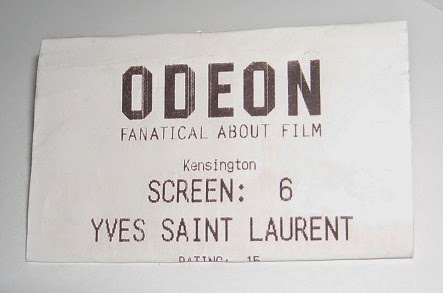 Of course I just had to see  "Yves Saint Laurent", the new film about the legendary designer, who sadly died in 2008.  This very stylish French film is a treat for the eyes of those who love fashion and beautiful clothes.

The film traces his life from his early success and fame as a fashion designer at Dior at the age of 21.  We see the opening of his own fashion house and his eventual venture into ready-to-wear.

It shows his long relationship, both in business and romantically, with his partner, Pierre Bergé.  We also learn of Saint Laurent's neurotic personality, his depressions and breakdowns and his drug dependency.

I left the cinema feeling rather sad, but I was glad that I saw the film.

Posted by Sandy at 22:55
Email ThisBlogThis!Share to TwitterShare to FacebookShare to Pinterest
Labels: Special Events